Are you our new leader? 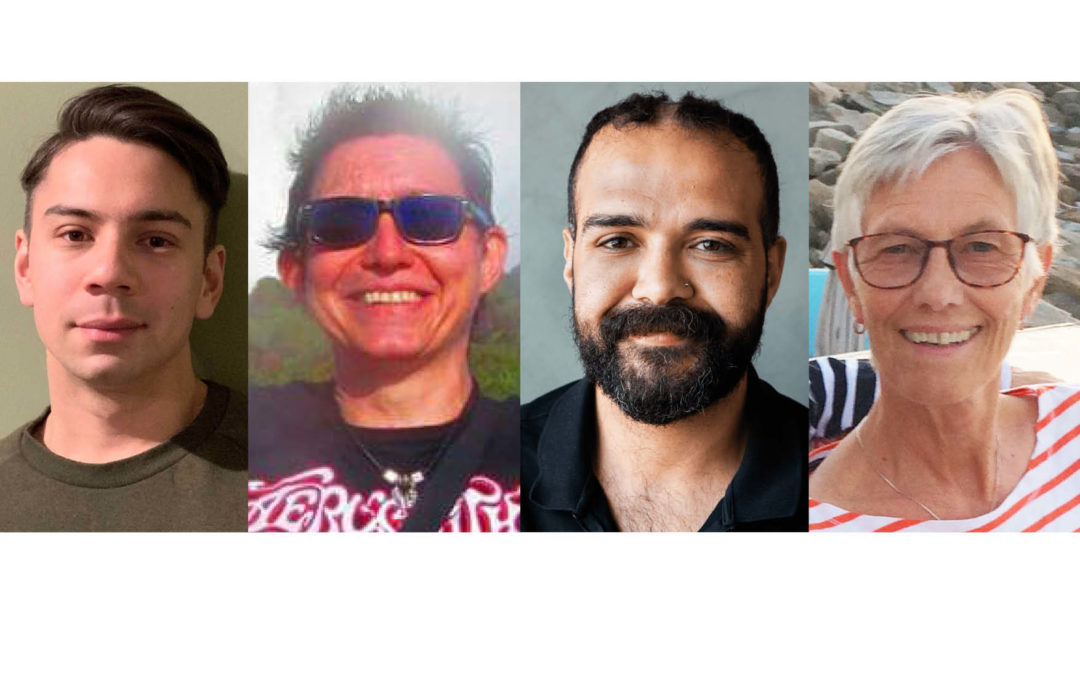 Would you like to engage in volunteer work for queer rights, social awareness and to contribute to the lives of LGBTIQ+ persons in our region?

Signed: DAG WERNER LARSEN, MAGDA KULINSKA, HANI ASSAF AND KARIN ENDERUD (photo – from left to right) – The Election Committee to the board of FRI Oslo and Viken.

FRI Oslo and Viken is a local branch of FRI, the Norwegian organization for sexual- and gender diversity. We are a volunteer organization led by a board, and now we in The Election Committee seek the new chairperson and candidates to the board.

The Oslo and Viken regions of Norway are vast. Viken stretches from Halden in the south-east to Hemsedal in mid-Norway, with Oslo in between.

As a organisation FRI Oslo and Viken advocate every day, the whole year around for human and Queer rights – for the freedom, acceptance and right to feel safe and welcome in our own communities, no matter who we love or what gender we are.

Would you like to join us in the battle for queer rights and to raise social awareness? To contribute to the lives of LGBTIQ+ persons in the regions Oslo and Viken? Then please put your name forward to us now!

Even though Norway is rated as one of the best countries to live in for LGBTIQ+ people in the world, many people still experience discrimination, bullying and hate crime.

In 2020 a survey issued by Amnesty Norway showed that 1 in 5 Norwegians found it uncomfortable to witness same-sex couples kissing. This kind of moral is exactly what prohibits people from coming out and being themselves.

And in Norway in the 21st century there has until recently been an open and legitimate public discussion about conversion therapy and if it should be legal or not. It still is, but it looks like this will change in a short amount of time. FRI has been an active contributor in stopping the harmful and discriminating aspect of conversion therapy.

In the 21st century in Norway our lives, love and freedom are still being questioned. Still our gender-expression, gender identity, who we fall in love with or how we build our families are “up for debate” in mainstream society.

Join the movement – join the board!

One of the most important missions of FRI Oslo and Viken as an organization is to strive to make safe and including spaces for queer people. Furthermore to actively campaign towards political and legal change in society – to make the lives of LGBTIQ+ people better.

In FRI Oslo and Viken volunteers run 27 different safe spaces and groups that our members can join and participate in throughout the year.

Also, we are the owner of and co-organizer of Oslo Pride and several other pride events in Viken. FRI Oslo and Viken also run the LGTIQ+-awareness program “Skeiv kunnskap” – for schools, healthcare and the public and the private sectors. 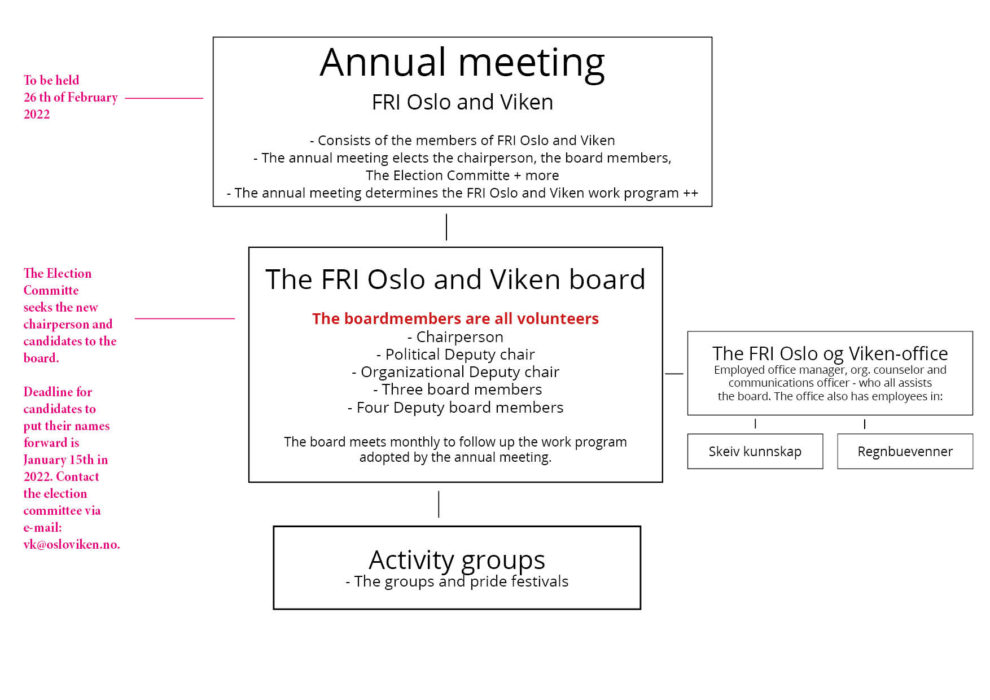 How the democracy in FRI Oslo and Viken works.

All the board-members are unpaid and use their free time to make Oslo and Viken better regions for LGBTIQ-people to live in and love in.

The board is elected every year by the members, and in February 2022 the annual meeting will again elect who gets to fill these important roles.

The Election Committees task is to present candidates to the annual meeting. And it is at this point, dear reader, where you and your LGBTIQ-commitment and activism come into play!

Do you live in Oslo or in Viken and want to contribute?

Would you like to be part of the FRI Oslo and Viken-board that advocates for human and Queer rights – for the freedom, acceptance and right to feel safe and welcome in our own communities, no matter who we love or what gender we are?

Then please put your name forward to us in The Election Committee now!

Come be a part of our organization – FRI! Together we are building a better society for us all – queer and straight!

PS!
If the board is not your thing? Maybe you know someone who would be perfect for the FRI Oslo and Viken board? We would very much like to hear from you, either on your own behalf or if you have a suggestion – please let us know if you know someone who might be suited. 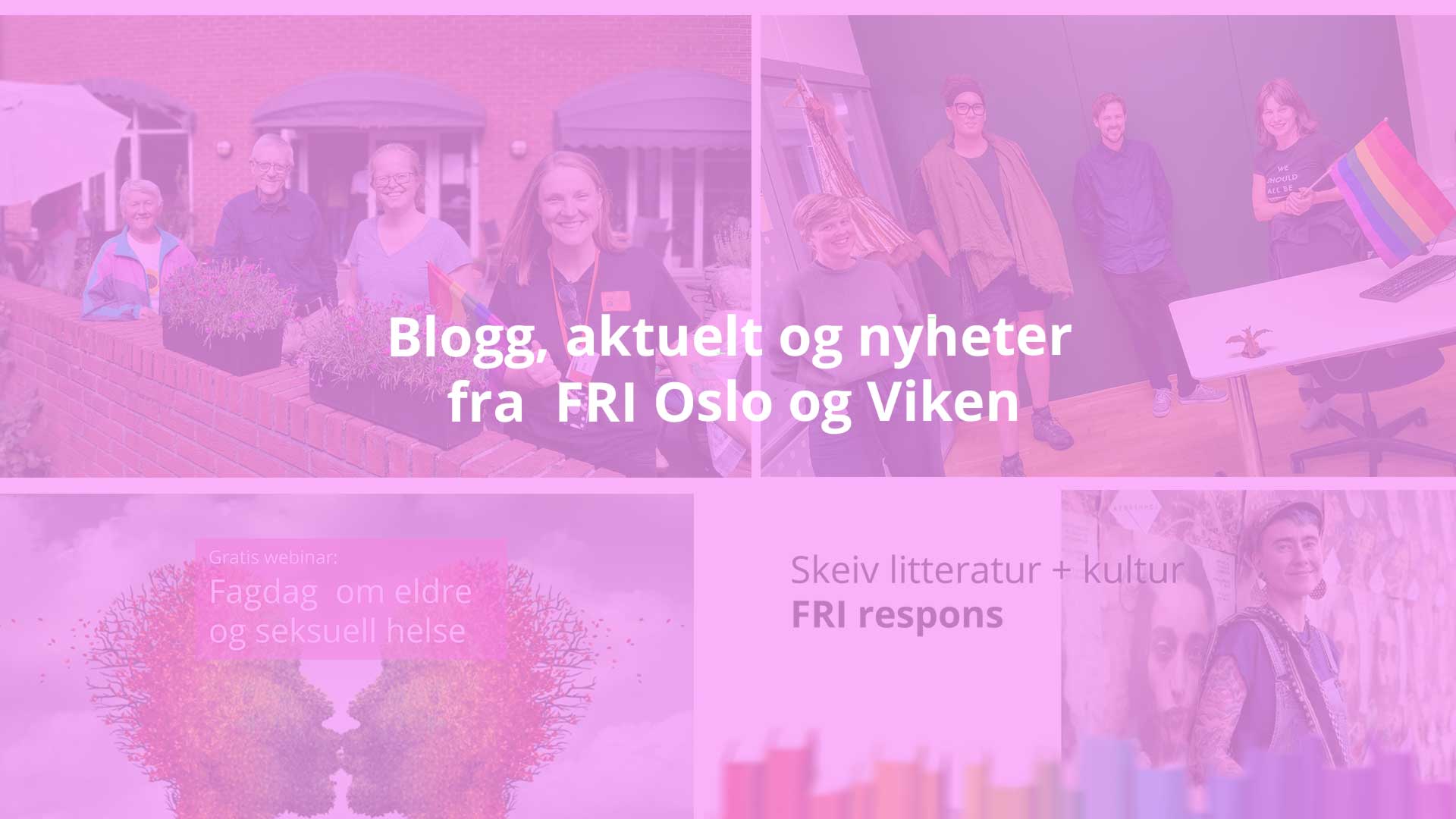